More than a job, a real passion rooted in the Houzelle family for more than 60 years. The RTF… the ORTF… the first channel… the second one in color… TF1 and now ATLANTIS TELEVISION, a journey of pictures, events and unforgettable memories. The real adventure of the little screen was yesterday. Today, the conquest of televisions continues and is still an everyday adventure. 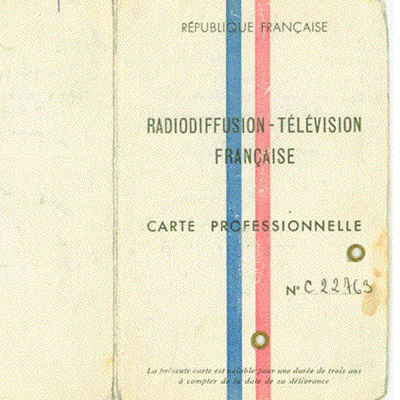 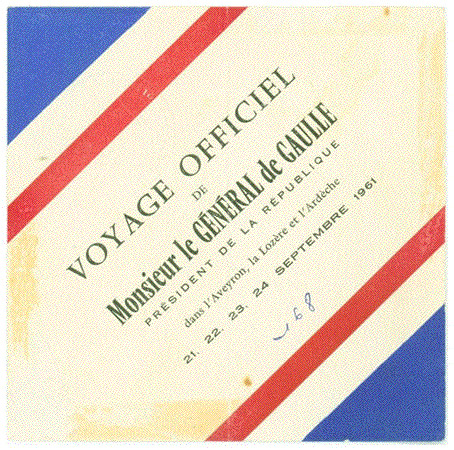 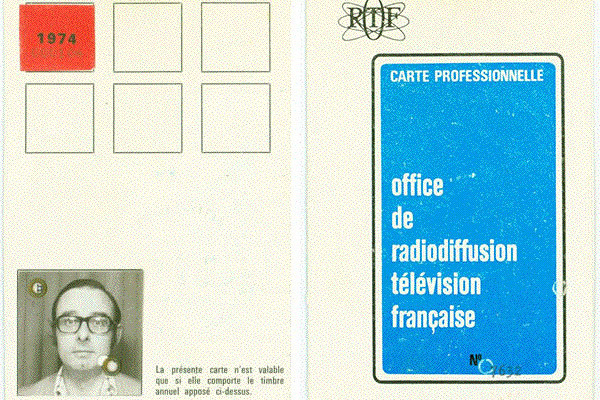 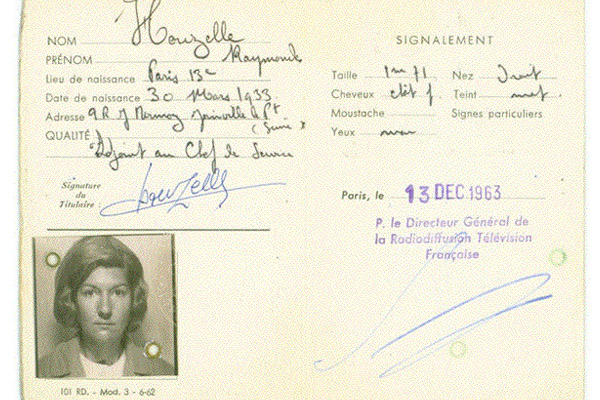 RESUMPTION OF SHOWS AFTER THE LIBERATION OF PARIS

Two months after Paris was freed, shows resume on television. They are broadcasted from studios on Cognac-Jay street. 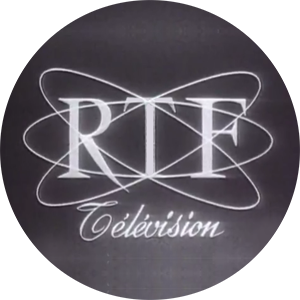 The Radiodiffusion Television Française, takes the RDF’s place. Its functioning is the same but it has an additional radio channel and, foremost, a second television channel.

It’s placed under the entire control of the State, following the bill of 1945 on the State monopole of national waves.

The Information Ministry of which it totally depends directly gives the RTF budget. 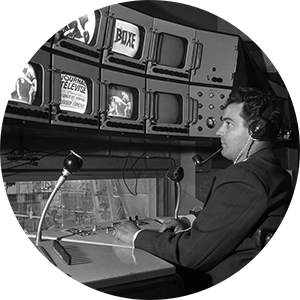 A MYTHICAL TEAM FOR THE FIRST NEWS PROGRAM

Pierre Sabbagh hosted the first news program. The team is composed by, amongst others, Georges de Caunes, Jacques Sallebert and Pierre Tchernia.

The number of viewers in France is estimated to a bit more than 3700.

It’s a few, but we have to precise that the broadcast, principally via the Eiffel Tower, only covers 10% of the territory! 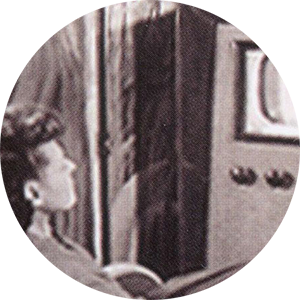 CREATION OF EUROVISION AND EURORADIO NETWORKS.

The UER, The European Union of Radio-television, gives as an objective to deliver images to every viewer in Europe, ensuring the trade and transit of news images and sportive events between every member. .

Catherine Langeais BECOMES AN ANNOUNCER AS POPULAR AS JACQUELINE JOUBERT

Catherine Langeais, whose real name was Marie-Louise Terrasse, who was engaged to François Mitterrand from 1938 to 1942, becomes a female announcer as popular as Jacqueline Joubert. In April 1987, the President Mitterrand will give her the Légion d’Honneur.

A new show starts: the viewer’s sequence. Catherine Langeais presents the news in the movie industry.

THE TRAIL TO THE STARS

It’s the launch of The Trail to the Stars, a show created by Gilles Margaritis, directed by Pierre Tchernia and hosted by Roger Lanzac, alias Mister Loyal.

It’s entirely dedicated to the circus and is broadcasted on Wednesday nights because there’s no school on Thursdays. It will last until 1976! 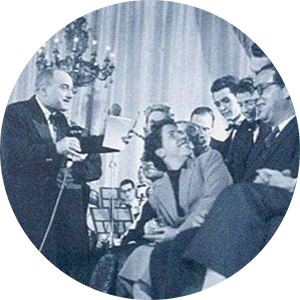 TeleMatch is the first televised game, hosted by Pierre Bellemare. The same year, launch of the first cooking show, Art and magic of cooking, hosted by Catherine Langeais and Chef Raymond Olivier. 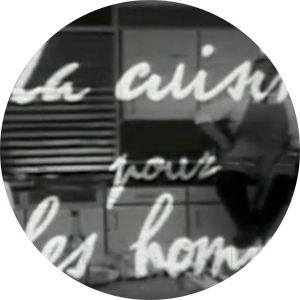 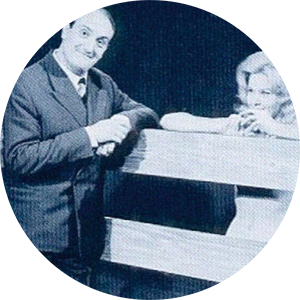 Numerous comic actors participate to sketches. In February 1960, the three creators will rather stop the show than undergo the censorship because of the Algerian War.

An estimation shows that the number of televisions in France culminates at 500 000. 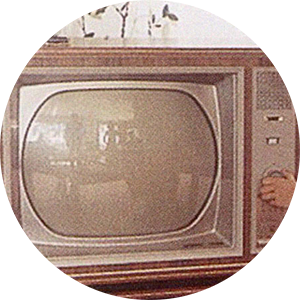 In 1957, the show will be renamed to the camera explores time.

FIVE COLUMNS IN THE HEADLINE

It’s the first great information show. Consecutively, a new entertainment show that will stay in memories begins: Télé Dimanche, created by Raymond Marcillac. It’s in this show, in the “Lucky Game” section that Mireille Mathieu will be seen for the first time in 1965.

Denise Glaser hosts a new show on the first channel: Discorama. It’s about music, albums, theater news, and the discovery of new talents.

The show will continue until 1974, when Denise Glaser will be “thanked” by Valéry Giscard d’Estaing who will profit from his status as a President to get rid of every personality of the little screen seen as too much on the left side of politics. 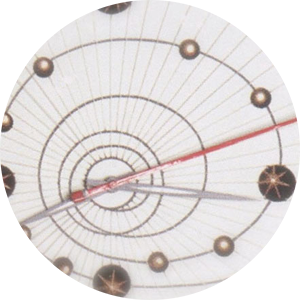 THE RTF OFFERS A MODERN LOOKING CLOCK TO ITS VIEWERS

Merry Christmas! The RTF offers its viewers a modern designed clock, as an opening and closing of shows. Useful to set your watches!

Leon Zitrone becomes host of the news show. He will keep this function during twenty years, on the RTF, ORTF, TF1 and finally on Antenne 2. 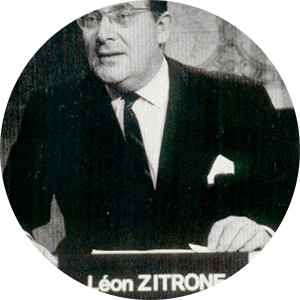 On an idea of the General de Gaulle, a European version of the show will be created from 1965: Games without borders. 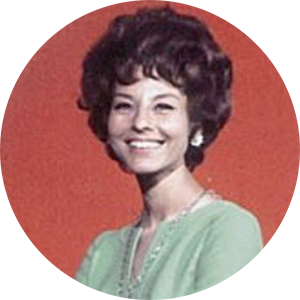 After her beginnings on Télé Monte Carlo in 1961, Denise Fabre joins the second channel as an announcer.

Births of a new show of which concept will make some addicts: The Invisible Camera, of Jacques Rouland, with Jacques Legras (principal actor in front on the hidden camera) and interventions of Pierre Belmare and Jean Poiret. 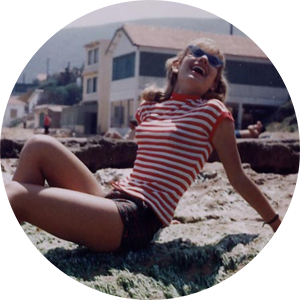 Noelle Noblecourt, host of Télé Dimanche, is fired with a lot of noise because she showed her knees on screen!

The Office of Radiodiffusion Television Française takes the RTF’s place. It’s placed under the Information Ministry’s trusteeship in order to control the respect of their obligations to the public service.

General De Gaulle wishes the ORTF to become an independent institution, as those in the other democracies.

That’s how the ORTF’s status becomes the same as the BBC’s in Great Britain. However, facts will show that the State keeps a rigorous control on the television shows. 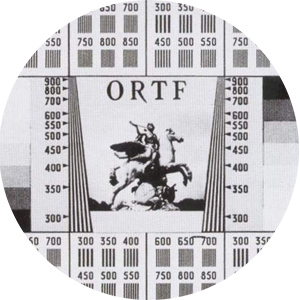 First performance of a play for the show In Theater Tonight. This show will last until 1988. We will have to wait until 2007 to see some theater on television again, on the first part of the night.

Armand Jammot hosts on the second channel, a show about cinema: The Screen’s Files.

The principle is to show a movie and then have a debate on a theme found in the film.

On the second channel, Pierre Tchernia hosts a new show on the news of cinema: Mister Cinema

THE SECOND CHANNEL IS NOW IN COLOR

Thanks to a coding standard of colors invented by Henri de France, the second channel is now in color!

Well… for those who have a television compatible, of course! 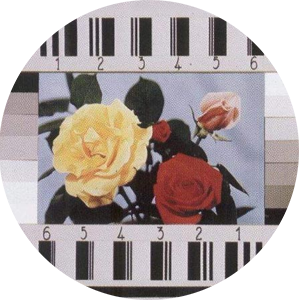 The first channel innovates with the first televised ads.

The French Advertisement Company (a branch of ORTF) will be created on the next year and will last until 1987. We will have to wait until January 1971 to see some ads on the second channel.

1969 marks the end of the Information Ministry. Now, the ORTF is under the trusteeship of the First Minister, Jacques Chaban Delmas. 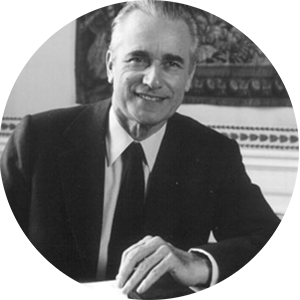 FIRST STEPS ON THE MOON

Millions of French viewers assist to the first steps of the American Neil Armstrong on the Moon.

THE TWO ORTF CHANNELS GET DIFFERENT BOARDS OF DIRECTORS

The two channels have now two different boards of directors. 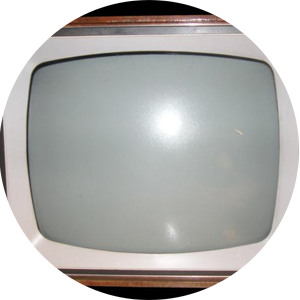 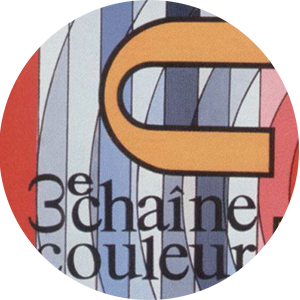 LAUNCH OF A THIRD CHANNEL

It’s in color and broadcasts every night some regional programs.

ROGER GICQUEL BECOMES DIRECTOR OF INFORMATION ON THE FIRST CHANNEL

Roger Gicquel becomes the director if information on the first channel. The next year, after the ORTF explosion, he will become the host of the 8pm news on TF1. He will then claim his freedom of speech and his independence from the power in place and won’t hesitate to express his opinion on presented topics during the news. 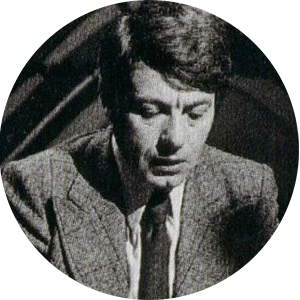 Bernard Pivot hosts Open the Quotation Marks, a literary show that will then become Apostrophes in January 1975.

THE LAW DIVISES THE ORTF IN SEVEN INDEPENDENT INSTITUTIONS

The three television channels still constitute the public service, under the trusteeship of the State. 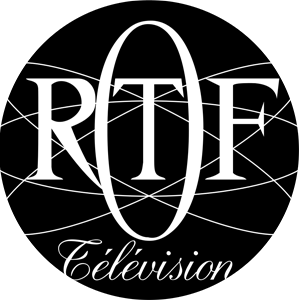 THE SATIRICAL HUMOUR COMES ON TELEVISION

Jacques Martin proposes on TF1 a satirical show, which will know a great success: The Little Rapporteur.

Two years later, with Good Sunday, Jacques Martin will host the program of a part of the Sunday on Antenne 2, and for many years.

Yves Mourousi becomes writer and presenter of the 1pm news program on TF1. He renewed the institution by being the first to propose a program shot outside, with at least one live outside during the week. But he also innovates with his light tone: his famous “Hello!” without ceremony will surprise more than one. 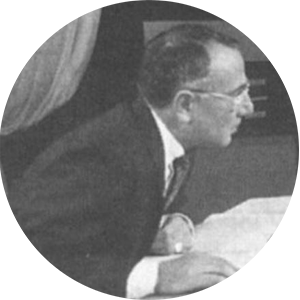 TF1 IS NOW IN COLOR

Less than 10 year after the beginnings of color on TV, it’s TF1’s turn to get them…