The Maginot line, the last rampart!

La ligne Maginot is a line 450kms long of fortifications built along the North East and South East borders of France between the two world wars with a view to stopping any German invasion. France did not want any more wars, having suffered losses of 1.5 million dead during the 1914-1918 Great War. The Line had an important deterrent value. For the French the Maginot Line was an impenetrable shield, Hitler not only had a shield, but also a sword, the Panzer divisions. The Maginot Line had « only » 58 major works heavily armed, often underground with several floors. An image is necessary to illustrate the defence system. Imagine an open hand, the living quarters are in the middle, in the palm, at the end of each finger the artillery battery underground in armoured towers. They can go down and disappear after each firing. These towers were fearfully efficient. The main works consisted of 303 blocks armed with canons of 88 and 75 mm under retractable towers. All along the line at intervals one can number 450 bunkers etc. Also invoked is the political battle which lasted 10 years and at last the project was approved! But also the determination of the Ministers of War Andre Maginot and Paul Painleve to get to the beginning of the project which was started in 1932 with huge means and the most modern military techniques.
What was the role played by the Maginot Line during the French campaign of May 1940. The main works were never defeated. During the autumn of 1945 at the time of the liberation, some of the large fortifications still occupied by the Nazis proved to be very difficult to be retaken by the Franco-American allied troops under the Generals Patton and Delattre de Tassigny. This French defence system was invulnerable!

THE FIGARO TALKS ABOUT IT!

The documentary of the Director Andre Annosse on RMC découverte which achieved its best audience rating for this channel since the beginning of the year. 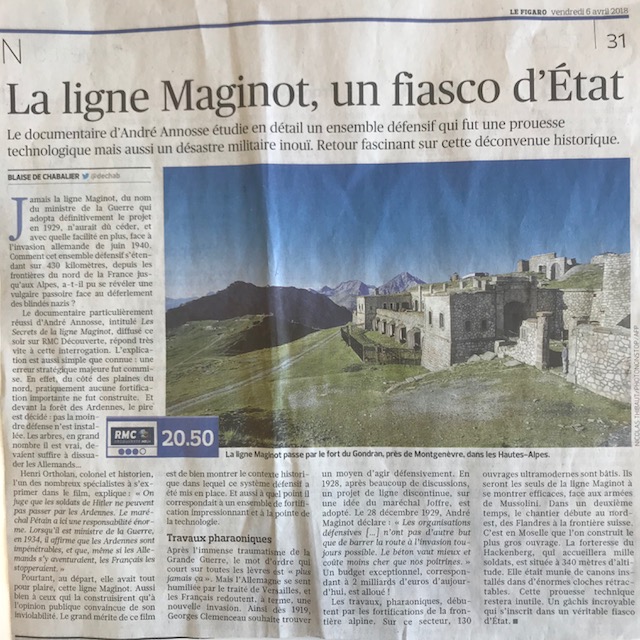